As I mentioned in the previous blog post the anatomy structure is composed of various subsystems (like how real life anatomy is). Whenever damage is dealt to an entity, it is received and handled by these sub-systems.

Behind the scenes, these subsystems have a health parameter associated with each body part, and based on different thresholds of this level, effects of different severities are applied to the entity. The Circulatory System has an additional bloodLevel parameter, which on dropping to 0, the entity dies.

I also made a very basic paper doll visualization which shows the effects sustained by each part. This screen can be accessed by pressing V. 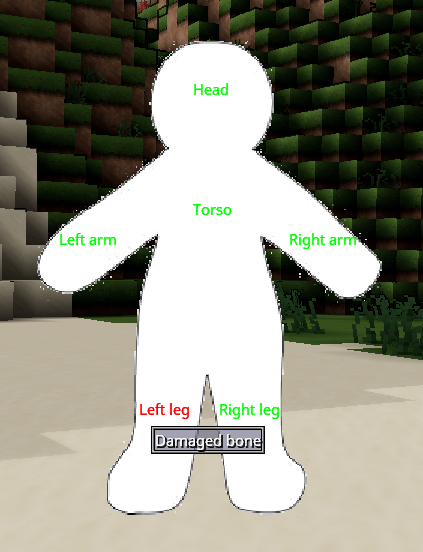 The entire structure has been designed in a way so that adding more subsystems or even custom systems for imaginary creatures would be easier. Each subsystem works independently and the AnatomySystem is used to send and collect data from each of these. This little guide I made might be useful for future content developers looking to make more anatomy subsystems.